Are we "Making you Think?"Photographer, runner, father, and chronic illness warrior (Diabetes and Crohn\'s Disease)
Home What is Crohn's Disease or Colitis?

What is Crohn's Disease or Colitis?

Inflammatory bowel disease or IBD literally means “inflammation of the bowel”. The term IBD actually refers to a group of diseases, specifically Crohn’s Disease (CD) and ulcerative colitis (UC). As an adult with Crohn’s Disease and insulin-dependant Type-2 Diabetes, this information is very close to home. In 2012, Crohn’s and Colitis Canada report that approximately 233,000 Canadians living with IBD: 129,000 with CD and 104,000 with UC.

What is Crohn’s Disease or Colitis?

Under normal circumstances, inflammation is the body’s normal and necessary response to infection or injury. Typically, redness, heat, swelling and pain accompany the response whether the “attack” is located in a cut in your skin or an organ in your abdomen.

For someone with IBD, inflammation of the gut becomes a chronic or lifelong state. Throughout life, there are episodes of flare-ups, and periods where the symptoms of the disease become quiescent (known as remissions).

What is Crohn’s Disease?

What is Ulcerative Colitis

The symptoms for both CD and UC can be similar. People with the disease may experience:

That is the still unanswered question and the answer remains a mystery.

The cause of IBD is unknown. Researchers and the medical community are working hard to uncover the answers, but to date, we still do not know the actual cause of these diseases that afflict over 200,000 Canadians (2008).

That is not to say there are no answers. In fact, there is strong evidence that IBD develops in genetically predisposed individuals who are exposed to environmental factors that trigger the illness.

In fact, the Crohn’s and Colitis Foundation of Canada (CCFC) is funding the Genetics, Environmental and Microbial (GEM) Project. This $5.5 million project will span six years and 5,000 subjects. It is recruiting the healthy children and siblings of people with Crohn’s disease to find clues to the genetic, environmental and microbial factors that may play a part in causing the disease. Click on our  GEM website for more information.

IBD has no regard for age, gender or race but there is evidence that people of Ashkenazi (European) Jewish descent have a higher rate of IBD than any other group. Interestingly, IBD also appears to be more prevalent in North America and northern Europe, with Canada having among the highest incidence rates of IBD in the world.

Inflammatory Bowel Disease (IBD) is often confused with Irritable Bowel Syndrome (IBS). Both have similar symptoms and similar names, but they are entirely different illnesses.

IBD is a chronic disease, characterized by inflammation in the GI tract. Depending upon whether a person has CD or UC, the location of the inflammation can be anywhere from the mouth to anus.

On the other hand, IBS does not exhibit inflammation. Although the exact cause of IBS is not known, it is speculated that changes in bowel function or the way the brain senses what is going on in the bowel contribute to the symptoms.

In both cases, abdominal pain, cramping, diarrhoea and nausea can occur.

The Burden of IBD in Canada

In 2008, Crohn’s and Colitis Foundation of Canada (CCFC) commissioned a report titled “The Burden of Inflammatory Bowel Disease in Canada”. This report updated the prevalence, estimates and calculated the financial costs of IBD in Canada in 2008. Canada has among the highest reported prevalence rates of IBD in the world; over 200,000 Canadians have IBD and 9,200 new cases are diagnosed every year. CCFC reported similar numbers in 2012, increasing their statistics to 233,000 Canadians living with IBD: 129,000 with CD and 104,000 with UC.

IBD is about as common as Type 1 diabetes and is three times more common than multiple sclerosis and HIV. From an economic standpoint IBD costs, both direct and indirect, are conservatively estimated at $1.8 billion per year. The emotional costs, impossible to quantify in dollars and cents, are clearly reflected in lower quality of life indicators.

Until recently, the social stigma of having a “bowel disease” meant that people with IBD preferred to stay private about their health issues.

But in fact, the desire to stay private about bowel problems means that IBD has been a “closet” disease. Only those with IBD, or who have loved ones with it, have been familiar with the disease and the challenges posed by its presence.

Please Note
This educational content was originally published by The Crohn’s and Colitis Foundation of Canada (CCFC) is a national not-for-profit voluntary medical research Foundation. Its mission is to find a cure for inflammatory bowel disease.  Please join with us in our mission to “Find the Cure” by clicking on our online donations and giving what you can.

Mark is a foodie in training, photographer, Starbucks addict, runner, and single parent living outside of Toronto, Ontario. Living with Crohn’s Disease and Diabetes, life for this Transportation Planner and RPP can be an interesting mix. 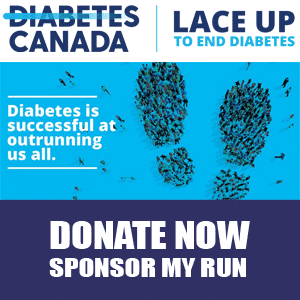 2020 Gift Ideas for Runners Recommended by a Runner

Drawing a Short Straw in Life: Fighting Back against Chronic Disease

Why you should not add a new hard drive to your computer as a backup solution?

Tip: How to Stop Your FreeStyle Libre Sensor From Falling Off Before the 14-day Expiry?

Fix: Safari Requires you to Always Login to Websites

Freestyle Libre 2 Coming to Canada in 2021

Making You Think blends my passions of running, cycling, photography, and inspirational thoughts with the challenges of living with chronic disease (Crohn's and Diabetes). I hope you enjoy my story.